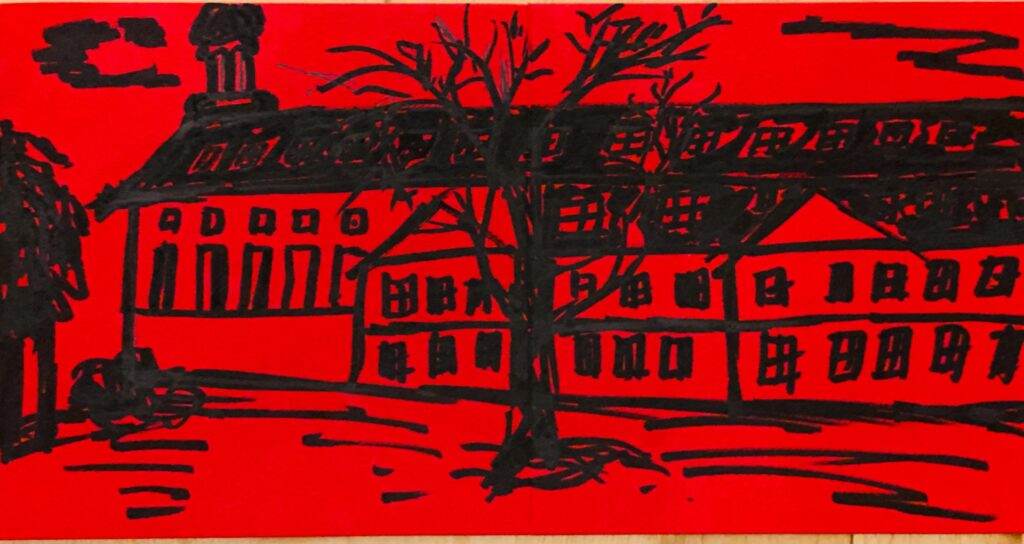 It was early 2005 … I was waiting for the ferry , along with my husband,  our new born , Jogesh bhayya ,  Rekha didi and their lovely girls … That is when I fell in love with that magical island called „Insel Nonnenwerth ( The Nonnenwerth Island ) with an architectural monument peeping through the greenery. It looked peaceful  yet mysterious and majestic surrounded by water . It reminded me of many a scenes I had read in English classics as a young girl …..

At this Moment I decided for me –  I want my girl to be a part of this great institution when she grow up . It wasn’t the architectural finesse or the history which influenced my decision , but it’s commendable academic excellence , disciple among the students . The option of a bi-lingual Medium of instruction and lnternational school leaving certificate .I was a busy mom (no wonder she is a papas girl 😍), trying to establish my own place in my dream job in a foreign country ,learning  a language ,I never came  in contact with  during the first 26 yrs of my life .While I was struggling to push my guilty conscience to my subconscious mind , I noticed one  fine day  that my lil girl of 3,5 yrs has kept the „ brown“ and „ black „.  Colour pencils aside .I was curious why she would kept those aside . She said „ Ammalu – black and brown are „ bad „ colours . I was a bit Schocked …. Who told you that mole ? „ one  of my Kinder garden kids „ I said chocolate is brown Sanjukutta …… it is tasty and all kids love it .„ but I don’t like brown and black .“As a young inexperienced mom ( no matter how much medical knowledge you have ) that was a Moment I wished I was back in India with my family and friends.

But there were people who helped me through this … her teachers at the Kindergarten had already known about this and had done a commendable  effort in making the kids realise that humans are different in many aspects but still the same in much more .During her third grade parent – teachers meeting, her young  and lovely class teacher told me that Sanjana was intelligent and has got score which would gain her access to a Gymnasium , but she was a bit worried that our daughter was more an introvert and on the shy side to make herself noticeable during interactive class sessions in gymnasium . But the teacher assured me that it was a trait she could change during her forming years .And all of a sudden we were in this school , in one of the Tower rooms facing an interview together . Unlike the interview I have watched in recent Indian films (Thank god , our generations didn’t have to go through those for kindergarten placements ) It was a playful test for the 9 year old child , trying to assess her potentials , her reasoning and imagination skills .I was impressed .Although she didn’t get into  the much  covetted „ Bi- lingual „ batch , she was accepted in the school and one of my dreams came true !I am an introvert among strangers so it was difficult for me to socialise   among other parents , but many  of them always tried to include in their conversations during meetings ….. and I was really thankful  for that .

Years flew like water in the Rhein and I could see how by girl blossomed with lots of friends who  frequented  our house and the confidence she radiated .As we were invited for a live tour of  Nonnewerth –  which was transformed into „ Hogwarts  school of witchcraft and wizardry „I couldn’t imagine a better set other than the hundreds of years old  school building.I was a proud mom among the spectators in one of the small groups of parents and family who were guided through nook and corners and basement that was hidden from normal public by narrators , one among whom was my girl, who happened to get some amusing reactions from the adult spectators  through her witty comments .I felt like watching the life in Hogwarts as an invisible intruder transported to a magical world .The drama  club really had   fulfilled its purpose to its fullest . One Fine day she was in her Highschool years and she became a class representative, following her moms and aunts steps … which I never really thought , when she was in the third grade .She has decided to became a teacher … which I strongly believe was influenced by those who have been her role models over the years in this wonder institution and from her play school to primary school.

I am thankful to those around her — her teachers and Friends who supported , trusted, guided and loved her in her transforming years from a shy , loving lil girl who disliked brown and black for a short time to a “ big “  intelligent , self confident , empathetic and beautiful chocolate brown skinned young lady .made her, who clearly knows what she wants and more mature than  me at times 😜Now I am devastated to hear the news of the disintegration of a historical institution which paved the way for successful and fulfilled lives for many hundred thousands over the 170 years of heritage .I am sure there are many many stories which would confirm mine turning young children  to dutiful , self confident and contented adults .Does any of the persons responsible for the shut  down ever think   about the plights and insecurities of the 500 plus students, their families ,  excellent teachers and other staffs of this school ? It is not just the name Nonnewerth „ which is vanishing . It is a tradition , an excellence in the field of education  and hard work of many many people who pioneered and steered it through hard times .Never realized that „Money „ could play a major role  in destroying history , present and future with  just a short announcement !How could the whole system ignore it , when the present world is trying hard  to save and cherish history around the globe!